With the increasing popularity of DC-DC power supplies, we have made a guide to help choose the right one for your needs.

In the context of computer motherboards, a DC-DC converter accepts a single DC input and converts it into the very stable voltages that a motherboard needs to operate (generally 3.3V, 5V and 12V, though some boards only require a single regulated voltage). A DC-DC converter will always be paired with either an AC Adapter (aka 'Power Brick') or a DC voltage from another system such as a battery.

How many Watts do you actually need?

We will often total the maximum power consumption of each component to calculate the power draw of a system under load. Thermal Design Power or TDP - though strictly speaking a measure of heat dissipation - is a useful measure for processors and GPUs. Other components such as your SSD and even your RAM will consume more power. And don't forgot those powered USB devices.

Several online calculators exist, though they tend to calculate from the perspective of a traditional ATX power supply. Figures given will often be much higher than real world figures. For example we've measured an H270 Mini-ITX system fitted with i3-7100T processor, SSD and Slim Optical Drive at 23W idle and 32W under medium load.

The other thing to note it that no power supply can ever be 100% efficient (DC-DC units are typically within the 90-95% range), so there will always be some Watts wasted in the form of heat.

Our rules of thumb: Any motherboard with an embedded Celeron, Atom etc. will be fine with a 80W or 90W DC converter. If you have a 35W TDP processor a 90W DC converter will be sufficient. A 45W Xeon or 54W Pentium or above will need at least 120W.

We can roughly break down typical DC-DC converters used with Mini-ITX motherboards into Fixed Input, Wide Input and Vehicle.

Vehicle DC-DC converters will work with a wide range of voltages and include protection against the rapid changes in voltage cranking an engine can cause. They will often include battery-specific functionality - powering off a computer if a battery has discharged below a certain voltage for instance.

Traditional DC-DC converters are built on a printed circuit board with an input and an output side. This allows them to be easily mounted within a case or sometimes an external enclosure. Many Mini-ITX specific cases use this type of DC-DC converter in conjunction with an external AC Adapter. Power output can be as high as 400W for a custom-designed model, though typically much lower to suit the task in hand.

Our rules of thumb: A 20pin picoPSU will work just fine if your board has a 24pin ATX connector. The additional 4 pins aren't required except in very specific circumstances. 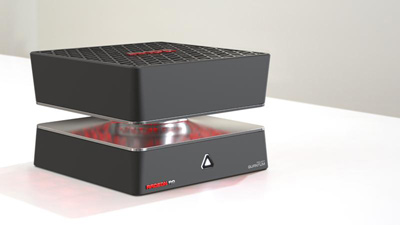 AMD demonstrated their Project Quantum at E3 this year as a showcase for their shiny new R9 Fury GPU.

Project Quantum is a proof of concept created for AMD by the Mixer Design Group in Texas. PCWorld snagged and dissected unit #5 of around 12 units, revealing its cooling and powering secrets in all their glory.

The nerve centre of the Quantum is an ASRock Z97E-ITX/ac Mini-ITX motherboard powered by a (shocker!) Intel i7-4790K processor.

This is no off the shelf board though. All the heatsinks and several of the front panel ports have been removed.The ATX power connector has been flipped through 90 degrees and fitted with a powerful DC converter. A meaty AC Adapter sits outside the case entirely, providing the DC converter with plenty of power.

The cleverest part is the cooling - a custom milled Aluminium waterblock sandwiches the board and the GPU, which all sit in the bottom half of the case together with the SSD. A pump and 180mm radiator and 3D printed reservoir sit in the top half the case, connected to the bottom by 3D printed hoses.

The Redstone PC is the Ultimate Mini-ITX Minecraft Machine
August 13, 2015 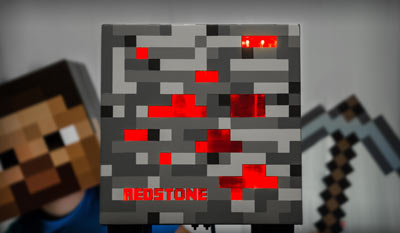 Spencer Kern put his skills as a 3D video game artist at Microsoft to good use when he created the Redstone PC.

Inspired by a Minecraft redstone block, the Redstone PC is an 8.5in cube constructed from extruded acrylic bars and laser-cut acrylic sheets solvent welded with acrylic cement. The outer shell is decorated by custom vinyl decals covered with a clear poly finish to dissuade them from lifting off the surface.

At the heart of his build is a Gigabyte GA-H97N WIFI Mini-ITX motherboard with an EVGA GTX 750Ti graphics card. The board is mounted upside down with strategically placed fans pulling air down and out of the bottom and rear of the case.

Spencer took several rolls of paracord and a crimp tool and braided all of his custom-made internal cables, and even designed an entirely new power button to match the rest of the case.

This clearly wasn’t enough work for Spencer. He also:

*For the benefit of our few readers from undiscovered Patagonian tribes still unfamiliar with Minecraft - Redstone is a building block used to make rudimentary and often highly complex circuits. 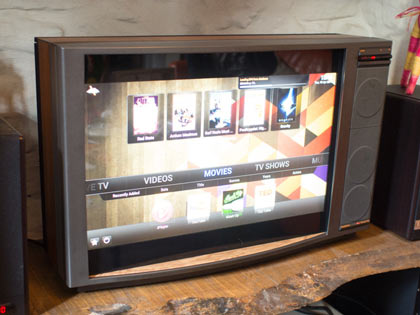 James Nethercoat picked up a Bang & Olufsen 7702 and replaced its guts with a Mini-ITX board running OpenELEC. The "Restomod TV" repurposes the original power button and remote receiver with modern equivalents. 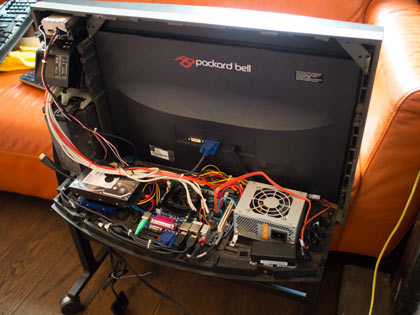 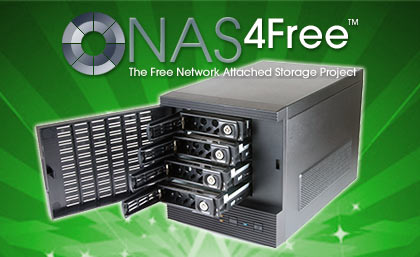 With so many of our memories and purchases existing only in the digital realm, having a reliable method of storing them is essential. We've written a guide to help you to install NAS4Free - free software which provides several methods of protecting your data by mirroring it across multiple disks.

NAS4Free is very scalable product supporting both UFS and ZFS, meaning it is a great choice for Mini-ITX systems - which can vary from low power consumption Atoms up to powerful Core i7 and Xeon based systems.

We are long time fans of XBMC here at Mini-ITX.com. OpenELEC is a distribution of XBMC (currently at version 12) with a streamlined installation and update process, making it even easier to utilise the graphics acceleration of ION and Fusion based Mini-ITX systems to make a very slick Home Theatre PC.

Here's how to do it. 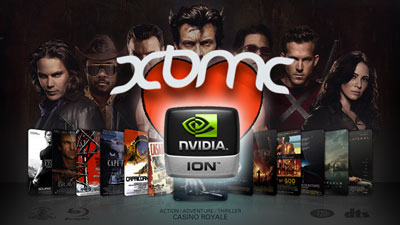 We have updated our guide to building an ION-powered HTPC using XBMC to version 10.0. As an added bonus we have included a new module with instructions to enable 24fps playback for you lucky people with 1080p/24fps tellies. 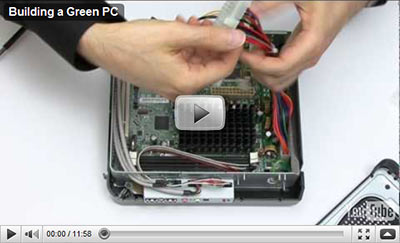 Christopher Barnatt sent us this excellent video demonstrating how to build a silent and fanless PC that consumes under 20W. Click to see just how easy it is. Then check out his website ExplainingComputers.com for more great guides.

We are long time fans of XBMC here at Mini-ITX.com. Version 9.11 makes it extremely easy to utilise the graphics acceleration of ION based Mini-ITX systems to make a very slick Home Theatre PC.

Here's how to do it.

The clever chaps at Cambridge University built an Autonomous Underwater Vehicle to compete in the Student Autonomous Underwater Challenge - Europe (SAUC-E). It was one of the smallest robots at the competition weighing in at just under 7kg, in part due to the tiny Pico-ITX motherboard used to power the autonomy software which guides it...

The SAUC-E competition is a Europe wide competition aimed at University level students. The teams design and build their own AUVs that must attempt an underwater assault course that may vary from year to year but can consist of gates, drop targets and surface zones that may have to be detected by visual or acoustic means. 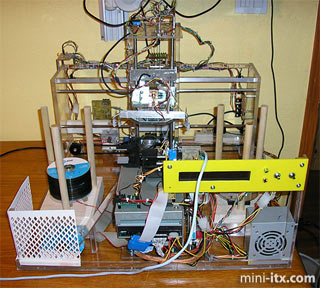 Aaron Shephards built himself a DVD burning robot to automate his backups. "Florian" picks up a DVD from a stack and places them in the DVD burner to be written. It then flips them over to be labelled, and even discards any bad disks into a naughty pile. All using self-built circuit boards, a few servos and servo controllers, plenty of LEDs, his own software written in Perl and components from local surplus shops. There's an EPIA M10000 motherboard in there too. Somewhere. 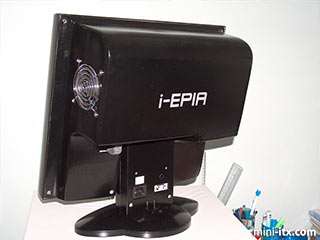 Tim Schellekens has built an inexpensive Monitor PC from Mini-ITX components and a 15in LCD Monitor found on eBay, loosely inspired by his brother in law's iMac. 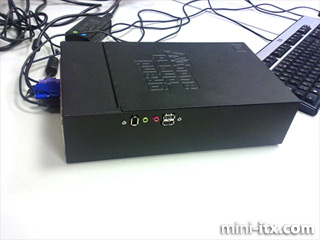 Mark Harris bought the GTA IV special edition, then decided to play with the packaging instead.

The safety deposit box was the perfect size to repurpose an old EPIA Mini-ITX motherboard and case and even came with a convenient carrying handle. This one's currently running Slax booting from a 1GB Compact Flash card and runs near silently with just a couple of fans to keep things running cool. 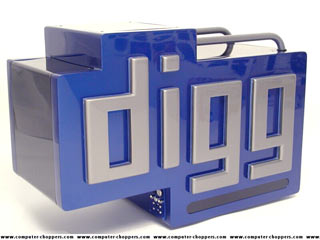 Alex 'Qtip42' Wiley's latest creation isn't a Mini-ITX based project, but it does deserve an honourable mention and a link here. Why? Because Alex is a member of an elite group of people - he contributed not one but two projects to the site all the way back in 2003 - the ironically Mini-ITX (and not AMD) powered "AMD Case" and the rather marvellous "Spider Case". Alex now runs a case modding company based in Oregon, USA called Computer Choppers. Nice one Alex. 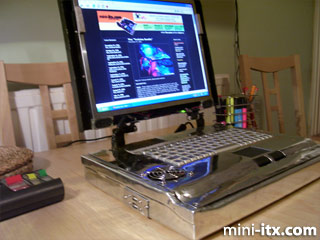 Torquil Harkness disappeared into his shed armed with a bundle of components, an angle grinder and mig welder and emerged several days later with his very own fully upgradable 2.0GHz Mini-ITX powered aluminium laptop. When he told the store what he was going to do we didn't quite believe him. We do now Torquil.

The next version will have SATA RAID.

The rest of the many Mini-ITX projects archived on this site can be found linked from our news archive, or using the alphabetical list on the right of the page. Or just have a random one.