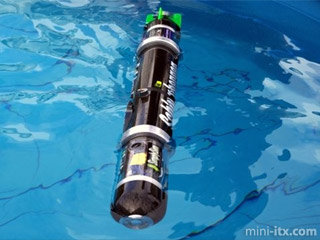 The clever chaps at Cambridge University built an Autonomous Underwater Vehicle to compete in the Student Autonomous Underwater Challenge - Europe (SAUC-E). It was one of the smallest robots at the competition weighing in at just under 7kg, in part due to the tiny Pico-ITX motherboard used to power the autonomy software which guides it...

The SAUC-E competition is a Europe wide competition aimed at University level students. The teams design and build their own AUVs that must attempt an underwater assault course that may vary from year to year but can consist of gates, drop targets and surface zones that may have to be detected by visual or acoustic means.