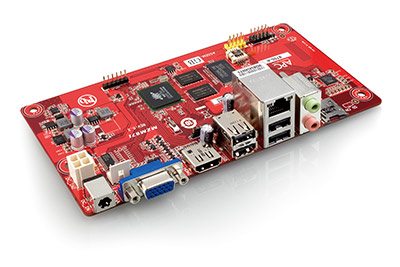 Comparisons will inevitably be made with the Raspberry Pi.

However the APC 8750 looks to have a less painful out of the box experience, with Android OS and applications pre-loaded on NAND Flash, a form-factor compatible with PC cases and a wider selection of ports fitted to just one side of the motherboard.

The APC 8750 runs a custom build of Android 2.3 with a selection of pre-installed apps including a browser, all pre-loaded on 2GB of NAND Flash memory. A microSD Slot allows further expansion.

The Neo-ITX Form Factor used by the APC measures 170 x 85mm and is exactly 1/2 the area of the 170 x 170mm Mini-ITX form factor. Neo-ITX boards will fit into any Mini-ITX chassis (perhaps with the addition of a couple of plastic standoffs at the rear for stability).

The APC 8750 is powered by a Wondermedia WM8750 SoC running at 800MHz which supports H264 decoding for 720p video playback. Power consumption is just 4W idle and 13.5W under peak load.