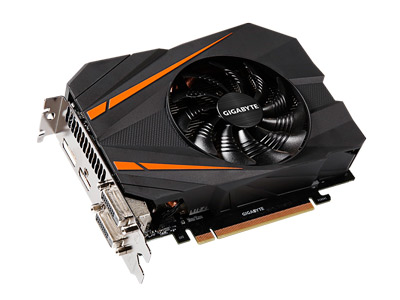 Gigabyte’s latest offering is the first card to be announced that usurps the previous king of this form factor - AMD’s R9 Nano - by fitting an NVidia GTX 1070 into a 17cm long package.

To fit into the smaller form factor Gigabyte have made some changes to the GTX 1070 reference design. The card has a 5+1 phase power design (upped from 4+1), a 90mm fan with a custom blade design, and

The card can be run in two performance profiles: Gaming Mode and OC Mode. Both modes are clocked slightly faster than the standard length Founders Edition card.

The card has a semi-passive fan which remains off until a pre-defined temperature or GPU load is reached, keeping noise levels down under light usage. The standard GTX 1070 is a 150W TDP card and we would expect the GTX 1070 Mini-ITX OC to be very similar.

With the GTX 1060 launch only days away, details are emerging from other manufacturers of their variants. Zotac look set to be first out of the blocks in the Mini-ITX form factor with their GTX 1060 Mini, with the ubiquitous 90mm fan attached to an Aluminium heatsink.