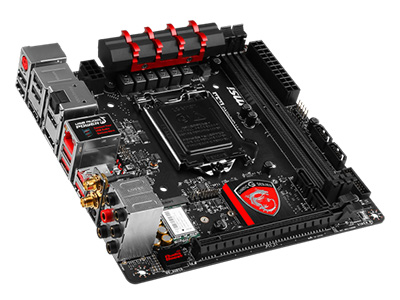 MSI have launched their Z97I Gaming ACK Mini-ITX Motherboard at CES 2015 this week. The ACK is an evolution of their earlier Z97I Gaming AC board, but in this case the 'K stands for Killer - both the wired LAN and wireless LAN port chipsets are Killer branded for low latency and traffic optimisation. The Intel Z97 Express chipset board supports current Haswell (4th Gen) and future Broadwell (5th gen) processors and overclocked memory up to DDR3 3300 speed.

The board has highest quality components throughout to withstand the rigours of online gaming - as you would expect on a board of this nature - though we're undecided whether the backlit audio codec is overkill or marketing genius! We'll expect to see the delightfully red and black accented ACK on store shelves within the next few weeks. 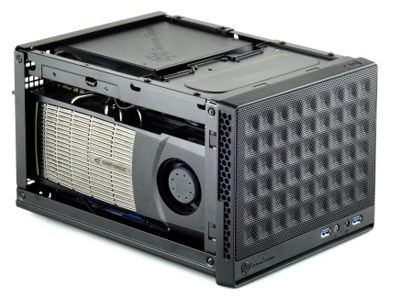 Silverstone's SG13 was first seen in prototype form at Computex 2014, but has now been officially launched at CES 2015 this week. The SG13 follows the effective 'Elongated Cube' Mini-ITX chassis design pattern first popularised in the early 2000s by Shuttle and now used by many manufacturers.

The case supports graphics cards up to 26.6cm and up to a 15cm (14cm recommended) deep ATX power supply, meaning most low to mid range AMD graphics cards and almost all NVidia cards will fit within the 11.5 litre chassis. The Mini-ITX motherboard of course sits at the back of the case and mounting points are provided in the front for a water cooled radiator to support the meaty graphics card you just fitted.