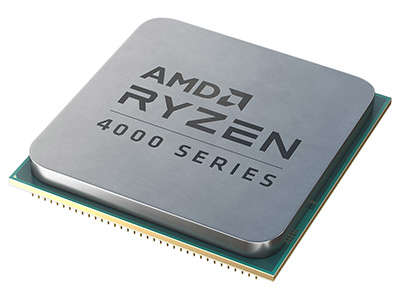 These processors advance the designs of the already-released "Renoir" Ryzen 4000 mobile processors to 35W and 65W desktop power budgets.

Ryzen "G" processors are of particular interest to Mini-ITX aficionados as they do not require a separate graphics card, and therefore can use a much smaller enclosure and power supply.

The new CPUs include an 8 core 16 thread Ryzen 7 for the first time, whereas the previous generation only went to Ryzen 5.

"G" processors have been noticeably more powerful than their Intel equivalents recently and AMD's marketing materials suggest this trend continues, though they do rather sneakily compare against 9th generation Intel processors and not the latest 10th generation.

Graphic benchmarks are similarly impressive, with a Ryzen 7 4700G generating double or greater frame rates in popular games than an i7-9700. This is despite having fewer GPU cores than the previous generation Ryzen "G" - 6, 7 and 8 cores across the range instead of the previous 8 and 11. If you are in the market in a few weeks for the best integrated graphics possible in a Mini-ITX machine without a graphics card the Ryzen 7 4700G will be your CPU of choice - if you can get one. The downside is these processors are targetted at the OEM market, and will not be available very widely in retail.