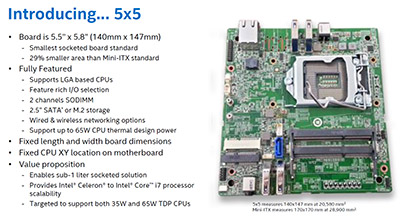 Intel have introduced a new motherboard form factor targetted at manufacturers of miniature systems which measures approximately 2/3 of the size of 170 x 170mm Mini-ITX boards, with the ability to add up to a 65W TDP socket CPU.

We'll let this slide as the 5x5 board shown at IDF 2015 has some interesting features.

The socket itself looks to have a narrow mounting pattern meaning custom heatsink solutions will be required. Intel are pushing manufacturers to use copper to reduce temperatures. The most powerful 65W TDP processors will sit in taller chassis due to the increased cooling requirements.

Much like NUC PCs, chassis designs across manufacturers will share similarities as Intel have strictly defined the position of all components on the boards, with connectors positioned on both the front and the rear. Power is provided by an external AC Adapter.

The example board appears to have a DC input, (HDMI?) Graphics outputs and Ethernet on the rear, with a headphone output and USB on the front of the board. There is a single SATA socket for chassis variants supporting 2.5in HDD or SSDs, together with an M.2 SATA socket for solid state storage mounted directly to the board. The 2x SODIMM slots suggest at least 16GB will be supported.