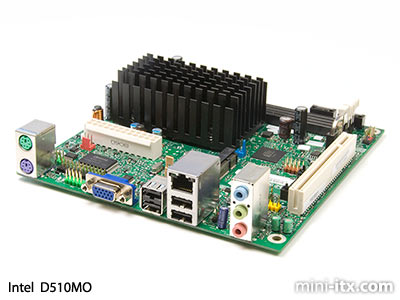 Intel launched their low cost x86 Atom processor in mid 2008 and changed the face of low-cost and low-power computing. In the Mini-ITX world, their popular D945GCLF and D945GCLF2 motherboards combined the Atom N230 and N330 CPUs with the ICH7 chipset and consumer friendly pricing. 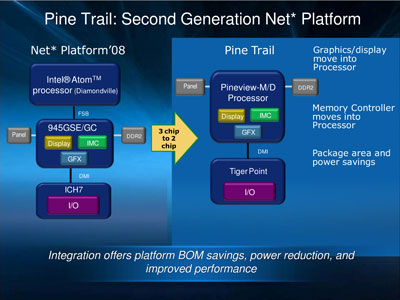 Pine Trail boards feature a more integrated design than previous Atom boards by moving the memory contoller and video subsystem from the Northbridge and into the main CPU. The whole platform can be created with just 2 chips which results in lower overall power consumption.

The Atom is paired with the NM10 (aka 'Tiger Point') Platform Controller Hub (PCH) which is responsible for providing the I/O subsystem such as Serial-ATA, PCI-express, USB, Ethernet and HD-Audio. Maximum memory supported has increased from 2GB up to 4GB.

The Pineview processors are marginally quicker than before - but the big news here is that both motherboards can operate without fans. We have had these boards in our underground testing lab for a while now and we can tell you they output very little heat. Our pre-release model didn't go above 50 degrees Celsius during the whole intensive testing process.

For those of you wondering how the new platform compares to what has previously been available we have created the following 6-way multi-graph:

In our tests the D510MO played 720p H264 perfectly but struggled with 1080i/p content. This is slightly better performance than the previous generation D945GCLF2 which dropped the odd frame during 720p playback. As before only fairly old or simplistic games will run on the D510MO. Impressive for a budget board - however the ultimate embedded Mini-ITX platform for video playback & 3D remains the earlier Atom paired with an NVidia ION chipset.

The Pine Trail boards are slightly faster than the previous generation, whilst consuming almost 10W less.

Connectivity has been altered slightly. Legacy Parallel and RS-232 ports are demoted to internal pin headers, and S-Video and PATA have been removed entirely. The addition of a Mini-PCI Express port on the D510MO could prove very useful. As with the previous generation, Gigabit Ethernet is reserved for the dual core D510MO.

While not representing a sea-change from the previous generation Atom platform, Pine Trail is a more mature product with improvements in many areas. If you want a great value fanless dual core 64-bit Mini-ITX motherboard, we have them right here: