The Mini PC space is heating up as we see more compact systems from manufacturers being released. The reduction in power consumption and heat output is allowing them to pack more powerful systems into small enclosures.

It seems like Intel is trying to change a few things with their upcoming NUC family of products. 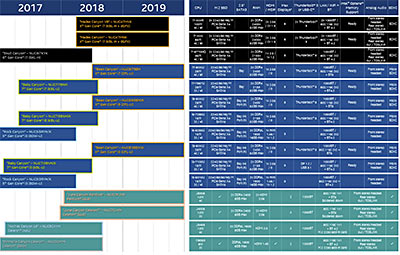 According to a road map posted on nucblog.net there will be three main categories releasing at three different times and price points

June Canyon - Celeron or Pentium based, low cost NUC with Gemini Lake based processor releasing around New Year 2018. The processors that will be powering those PCs will be Celeron J4005 (10W TDP) and Pentium J5005 (10W TDP).

Hades Canyon - A new type of high-powered NUC with both VR and Non-VR models. The non VR comes with 65W Kaby Lake-H CPU, while the VR model comes with *100W* Kaby Lake-H CPU. The roadmap suggests it supports dGFX which could mean Discrete Graphics. I will feature two M.2 slots, two Thunderbolt 3 ports and six display outputs. Hades Canyon will be available in Q2 2018.

Bean Canyon - The most "ordinary" model of the bunch. It will feature either Core i3, i5 or i7 based on a Coffee Lake-U SoC. TDP of the processors will be kept to 28W. There will be a new type of HDMI connector called HDMI 2.0a. Available in H2 2018.